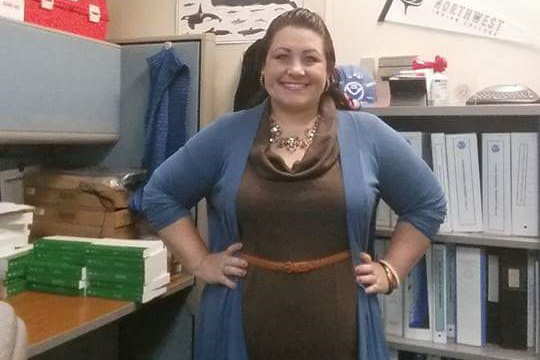 My name is Jennifer Borrero. I am a 39-year-old disabled United States Navy veteran. I began my journey when I was 21 years old. I am originally from Chino Hills, California. I am married with five beautiful children and three grandchildren. I joined the United States Navy on August 25, 1998 in hopes to change my life, gain experiences, travel and to get a degree. I worked as a Legalman Second Class Petty Officer for nine years on active duty having been stationed in Norfolk, VA, Newport, RI, Pearl Harbor, HI and Coronado, CA and two years as a reservist in San Diego, CA before landing a job in the federal government. My first job after leaving the Navy was with Northrup Grumman. From there, I worked as a supervising legal secretary for the California Correctional and Peace Officers Association (CCPOA), which was the union for the Department of California Correctional Officers. I found out about USAjobs.gov and applied for a position with the Federal Aviation Administration (FAA) in Riverside, California as an Aviation Safety Assistant. Getting hired for that position was monumental for me even though I was taking half of a pay cut because I knew that the Federal government would be able to provide me with an excellent retirement program. Since I was a military veteran, my years that I served in the Navy would count for retirement. This would provide me an opportunity to retire at the age of 57 years of age with 30 years of federal service time worked on the books. The FAA allowed me to grow and gain skills in Budgeting, Acquisitions and Purchasing that I had not had before. After two years with the FAA, I applied for a position with the Department of Commerce (DOC). If hired, I would advance in pay by two grades. Soon after applying, I was hired for the position and my family and I moved from Riverside, California to Seattle, Washington to begin my new journey with the DOC, National Oceanic and Atmospheric Administration (NOAA), Office of General Counsel (OGC) Northwest Section in November 2014 as a Law Office Manager. The skills that I gained from the United States Navy as a Legalman, which is equivalent to a paralegal or law office manager, helped position me for my current position. It was always a dream of mine since I was a child to work in a law office and to become an attorney. Because of the Navy, the Post 9/11 GI Bill afforded me an opportunity to continue my education by paying for my tuition and books through Kaplan University. I enrolled with Kaplan University because they gave me many credits for my military service and I started my education journey in August 2012. I began working on my Bachelor of Science degree in Legal Studies. This past February 23, 2016, I graduated with a 3.26 GPA from Kaplan University and I am a Golden Key Honors Society member. The Navy provided me an opportunity to achieve my dreams of being successful in the legal field. I am 100% grateful that I was able to gain the experience, skills and education I needed to move forward in a high demanding career field within the Federal government and primarily with the Department of Commerce, NOAA OGC Office. Today, I look forward to starting my Master's degree program with Kaplan University in Public Administration and specializing in Governmental Management in November 2016. My hopes for completing my Master’s degree will help me be even more successful within the Department of Commerce. I believe that had I not enlisted into the United States Navy back in 1998, I would not be doing what I do now and I would not be able to network with such great people within the Federal government. My job is extremely rewarding every day. I will continue to push forward into higher pay-grade levels and retire where I want to be. I also look forward to the future and the retirement opportunities the Federal government gives its employees.